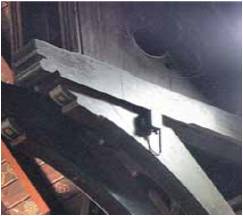 Feonic’s  audio drives as hidden speakers.  To transform the roof of a 19th Century Church into a state of the art sound system.

The sound system in place at Christ Church is now almost invisible but provides a clear transmission of sound, which is not loud or jarring but mild and ‘as if someone is speaking right next to you!’ We no longer have big speakers but diminutive transducers!

Thanks to such advanced technology, these transducers use the surface upon which they are fixed as sounding boards in order to project and amplify sound. Traditional cone speakers have a narrow field of sound, where the sound is projected from the front. But Feonic F-Drives, when fixed to a rigid surface such as wooden panels, produce an even spread of sound by vibrating the whole surface of the material.

Feonic Note – traditional PA speaker systems force sound from unsightly speakers often bolted onto pillars. This sound echoes and reverberates around the large space. Sound bouncing off hard surfaces making music and voices almost unintelligible. And no matter how loud it becomes – indeed, increasing the volume usually makes the problem worse. Feonic Church Sound Systems gently immerse the listener in sound. Surfaces emit the sound. Whether in the roof as in this case or from under the floor or from other resonant surfaces in the building.

This graphic from a transport example helps explain the concept of sound from large surfaces.

PA Sound System Directional Speakers for Museums, Galleries, and Public Spaces like Churches. Controllable sound at the right volume without echoes and reverberations

The PA system at Christ Church is probably one of the most energy efficient and eco-friendly systems that one can get today. The amplifiers use most of the power, but because we have gone for the high efficient transducers to spread the sound around the main church space, the actual power used by the amplifiers is very low.

It has now been in place for a year and a blessing it is. The sermons are actually heard, so it is a big challenge to the preacher and to the congregation!

We highly recommend this new approach to hide speakers in churches to other congregations. We will be happy to give a walk-in tour: already another congregation in the diocese is arranging just such a visit.